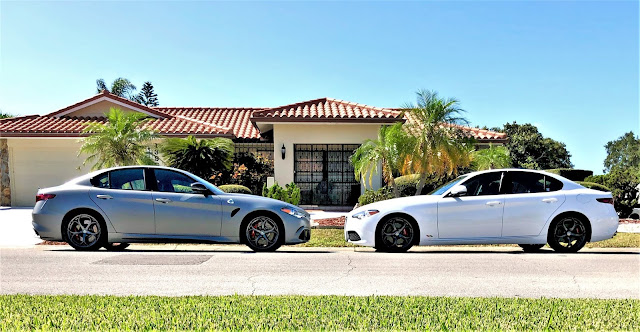 Here you have it- straight from the owner's experience of a 1330 mile road trip in the above beautiful Alfa Romeos.  On the left we have an ultra rare, 2019 NRING Quadrifoglio in Circuito Gray.  Car #07 of only 55 made for the US market.  Delivered to your writer on September 7, 2019.  (Alfa Romeo of Rochester, NY)  And on the right we have a 2017 Giulia Ti Sport in Alfa White with red interior. Purchased on April 12, 2017 from Sunset Alfa Romeo of Sarasota, FL.

I must say, the team at Alfa Romeo USA of Rochester was super to work with, always client focused and they pay attention to the details.  I dealt directly with Matt Sherman and if Matt was busy and I had a question, team members Bobby Carlin and Ian Phillips were always there to help. Matt was reliable and always followed through during my wait for the car to arrive.  And the day it arrived, Matt personally accompanied me in 'unwrapping' the new delivery.  I'll post a video and story on the 'birth of the NRING' at Alfa Romeo of Rochester soon.  My buying experience was a pleasant one. and although I'm not in Rochester for most of the year, I will make it a point to stop by and say hello to the guys when I'm in town.

Now on to the cars:

Trim is trim- other things that make the performance stand out on the NRING include the huge brake discs, wider P Zero Corsa tires, fully functional hood, fender and front and rear brake cooling vents and a massive rear air dam.  If you look under the NRING you can also see several subtle air flow diverting fins that were developed as a result of hours in Ferrari's wind tunnel.  This and the Ti Sport both benefit from the one time collaboration between Alfa Romeo and Ferrari engineers when the cars were designed.

But the biggest difference in the punch in the back upon acceleration is the Ferrari derived 2.9 Liter V6 in the NRING Quad vs the 2.0 Liter 4. It translates to 505 horses under your foot as opposed to a herd of 280 in the Ti.  Don't get the wrong impression about the Ti Sport. It is very quick.  But the NRING is scare you to death fast, especially in RACE mode.  You had better hold onto the reigns of those 505 ponies when you hammer the throttle.

Here's my thoughts as they flow onto the paper after having made the NY- Florida trip on the same route with each car. And to give you a visual or two, a picture here and there is added to keep it interesting.   For example, here's a picture of my Ti Sport after climbing two miles uphill heading south out of Williamsport, PA.  A brief stop at the scenic overlook gave me and the car a chance to rest. 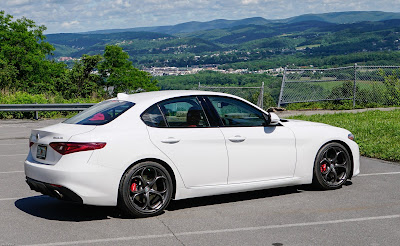 So how do they compare in the real world of driving as in a road trip from New York to Florida in 20 hours or less? One of the best ways to see the difference in the cars' performance is in the hills of Pennsylvania on RT 15 between Mansfield and Williamsport.  The road south towards Williamsport is made for a Grand Touring car. There are miles of four lane, divided highway that are surprisingly smooth and curve around, up and down mountains. Or large hills if you compare it to the Rockies.

The Ti Sport handles them with ease and because the car is lighter than the NRING by around 350 pounds it is quite nimble, especially around the tighter bends.  Consider that you a doing 80-90 around bends that look more like corners at that speed. It has plenty of pull up the long hills, although you are into the turbo a lot of the time.

The NRING Quad on the other hand is on another level.  Getting to 100 going uphill is nothing for this twin turbo beast and  I really had to be careful to stay out of the throttle as the car wanted to give you more and more speed when you didn't want or need it. I would never attempt it on a public road in the US, but I can see this car cruising comfortably, as if sitting in an easy chair at 120-130.  It is that stable and glued to the road. The Ferrari wind tunnel testing proved its worth in the final product! The Quad version is also the only sedan with an active aero front spoiler that lowers above 71 MPH to give an added 200+ pounds of downforce to the front end. 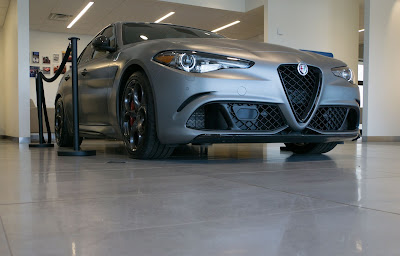 As you can see here in the showroom that black, carbon fiber active front wing.  Good they thought of that as the car really benefits from it.  And if you consider the car has a top speed of 191 MPH, it become essential for stability.


That brings me back to the Ti Sport.  The word stability.  That describes the Ti's strength.  It is lighter than big brother, but it feels incredibly well balanced and planted on the road at Interstate highway speeds of 70-80 MPH. And it keeps its feeling of stability in the rain, inspiring confidence when driving it.

Both cars benefit from the ZF 8 speed automatic. The guys/ gals that programmed that need to get an award. Each car feels the same- hit the throttle and the gear you want is right there- no need to paddle shift to get there (Unless you want to play around with the gigantic paddles for fun).   I had a Porsche Cayman with the 7 speed PDK automatic and it never was in the gear I wanted, largely due to a sweet 6 that needed to be above 3500 rpm's to make any kind of power. But the two Alfas are lower revving, torque machines that just catapult you forward any time you press the pedal down. It's intoxicating- almost like an electric golf cart when you feel that initial acceleration- only these two keep building speed until you cry uncle and get off the gas!

So in summary, each Alfa has its strengths. The steering on each is phenomenal. That has been reported in every road test I've seen on these cars. (Try driving one and you will see)   The Ti is lighter, slightly more nimble due to a smaller turning radius and it gets better gas mileage, of course. It is a fantastic car to drive long distance and the sport seats (the same as in the Quad/ NRING) are super comfortable over hours of driving.

The NRING/ Quad is everything the Ti Sport is and more.  It is actually quieter in everyday driving and it has a slightly smoother ride, if you can believe it- certainly surprised me.  But I think that is due to the extra weight it is carrying. The V6 is so smooth, and with the twist of the dial to Dynamic or RACE modes, the car becomes a beast.  Like having two completely different cars. The speed this thing builds will make you pay attention to what's going on.


In the two years since I purchased the Ti Sport there have been some refinements too. I notice that the AC fan control works easier on the NRING/ Quad- you turn one click and the fan speed changes- in the 2017 Ti Sport you turn one click and it displays the speed setting, then you turn a second time and it changes the fan speed.  A small detail but a big improvement.  Another observation, the headrest in the NRING/ Quad is much softer and more comfortable to put your head back to relax.  The Ti Sport's headrest is hard like a board. A small detail but again when you drive 20 hours it makes a big difference. I also noted the AC fan speed reduces automatically in the 2019 when the car shuts off via the Stop function at a stop light. This is very good when you live in Florida and its 95 degrees out.  The cool air runs out quickly if the fan is blowing on high.  I manually turn my AC down every time I stop with the 2017 car.  Again small details that add up.

I hope you have learned a little about these two cars. Each one is a superstar in its own right. Both are tremendous values for the dollar. They are, simply put, four door Ferraris. And the NRING/ Quad is honestly a four door supercar! It is an astounding value for the money.

Here's a few more pictures of this incredible machine: 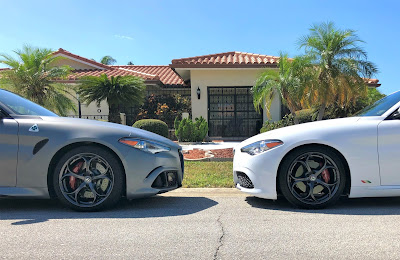 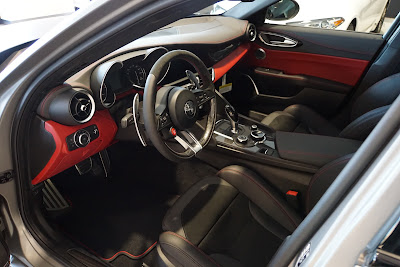 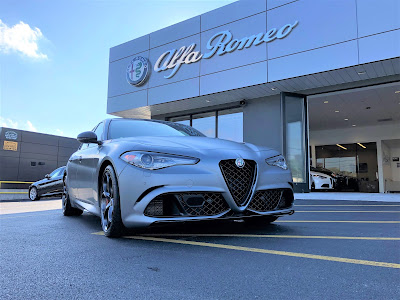 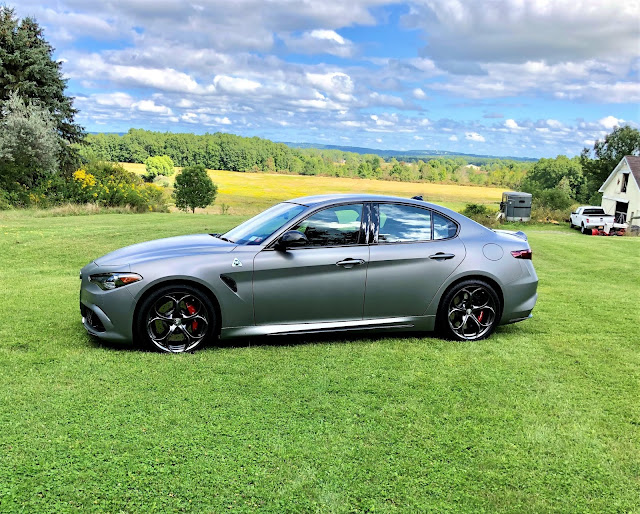 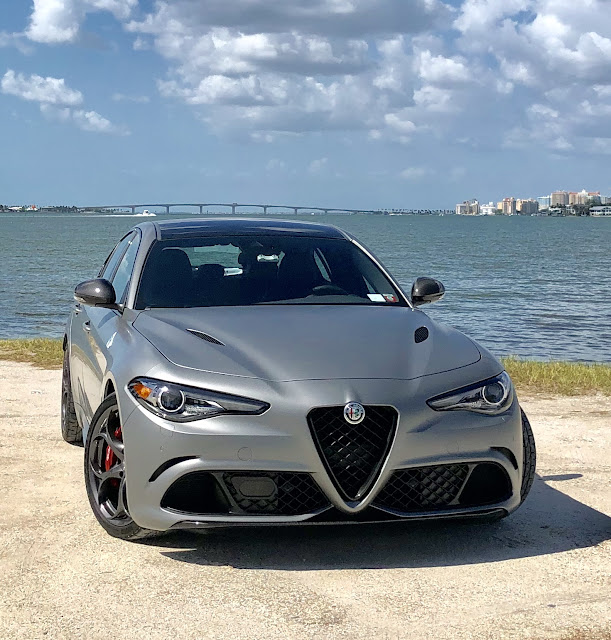 From New York to Florida, what a car to take a road trip in!

Alfa Romeo NRING Quadrifoglio- unmatched by any four door sedan.  Fastest four door sedan to lap the Nürburgring at the time of its introduction.  7 Minutes 32 seconds.

Brought to you by Paul Ziegler, Publisher  of Carcamerastory.com and author of "Echoes From The Glen"        Follow him @wownowpics


Posted by carcamerastory.com at 6:41 PM