From snowy Rochester, NY to sunny Seminole, FL this is my experience with the new, Honda Civic Si. The trip entailed 1330 miles of driving on all kinds of roads in conditions that ranged from snow and a washboard of ice to dry and smooth warm ashphalt with temps in the 60's. 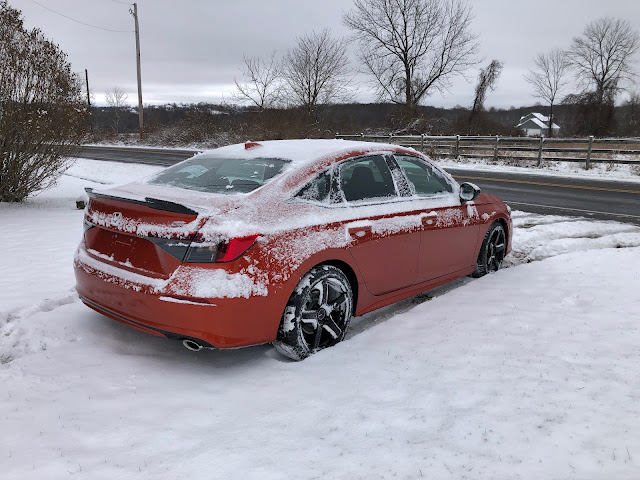 I purchased this beautiful, Blazing Orange Pearl Civic at Ide Honda in Rochester, NY on December 22nd. Timing was good as I called around to several dealers in early November and as it turned out, the day I called Ide Honda they learned they were going to be getting this Si.  There was no build date, but they expected to see it before the end of the year. I met with Julian Barona in sales and I immediately put down a small deposit to reserve the car. Julian was great to work with and he really knows his Civics, having owned an Si and now a Type R.  If you are in the market for a Honda, I highly recommend you give him a call at 585-504-0193.

December in Rochester is not the best time for keeping a new car clean, but I knew in less than two weeks I would be breaking the bonds of winter's clutch and heading to Florida. As seen in the pictures below, there was a huge contrast.

Civic Si and I left on a chilly 15-degree morning on January 4th, the day after a huge snowstorm scraped across the Mid Atlantic, knocking down power lines, toppling trees and leaving up to a foot of snow in the Washington, DC area.  I left thinking that the roads would be cleared and salted by the time I got down near our nation's capital.  After all we are the most powerful country in the world and if any area would have plowed roads, they would.  Wrong!

Things went well the first 250 miles from New York through little towns like Springwater, Bath and Painted Post as I worked my way to RT 15 in Pennsylvania. The Si kept me toasty warm as I headed south, climbing to higher and higher elevations the further I went. It got colder too, hitting a low of 10 degrees as I crossed into Pennsylvania. The roads fine, no problem. The Civic was eager to climb hills with it's revised torque curve, pulling easily up through the many long rises in southern NY and northern PA. My new Continental Extreme Contact DWS06 Plus tires were giving me the traction I needed while providing a smooth ride. I also must note the seats are some of the most comfortable I've ever sat in and that includes my Alfa Romeo Giulia Quadrifoglio. I did not miss heated seats as the fabric used on them seems to overcome that. I never felt cold in them.

Everything changed when I reached Warrenton, Virginia on RT 17. The roads were not just snow covered but ice covered with a sheet of the stuff 2-3 inches thick. And it wasn't pretty white stuff but ugly dirty brown ice. I was shocked to see they don't use salt there. Looks like they spread brown sugar everywhere. Must be some environmentalist thing- save a tree but kill a motorist as I see it. But that's just me.

After driving for about 40 minutes with cars off the road here and there I finally reached I-95, one of the east coast's most heavily traveled roads, Again I thought, surely they would have I-95 cleared a day after the storm.  Wrong again!  It was just as bad as Rt. 17 that lead me to I-95 except there were trees down every 1-2 miles covering the lanes on both sides and the brown washboard of ice was still present! I thought I was traveling in a third world country, not the USA!  I continued on until, finally about 20 miles north of Richmond, VA the roads were just wet and the torture was over. 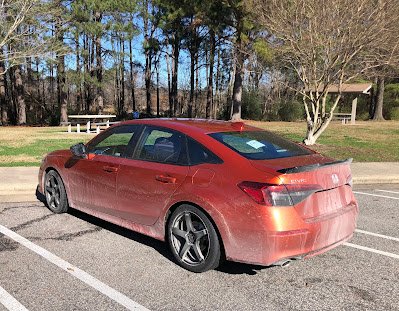 South Carolina rest stop. Except for a dirty car, I survived I-95 in Virginia

From Richmond to Savannah, GA it was smooth sailing in sunny and clear conditions. The Civic was very quiet and the engine felt refined, even smoother than my 2.0 liter in my 2021 Accord.  Although not quite as quiet as the Accord, it was close. I attribute that to the Continental tires. The Civic was getting 37-38 MPG and about every three hours I would stop to stretch my legs, and only about every 5 hours did I need gas. This part of the trip allowed me to play around with the settings on the cruise control, lane keep assist and radio settings. I don't like reading through the owner's manual for everything, preferring to try the controls directly to see what they do. I learned a lot and also learned what I'd need to read up on in the owner's manual.

Darkness was fast approaching south of Savannah and upon reaching the Florida border I had the navigation screen up and running. It is so nice to have the Apple Car Play and with voice commands say where you want the guide to take you. All I needed to do is say 'Starke, FL' because from there I could find my way back to Seminole with no assistance. Like a charm, it guided me through the dark and confusing lane changes needed to get from I-95 to I-295 to I-10 to Rt 301.

Rt 301 was so much easier with the Civic. If you have ever been on that stretch from Jacksonville to Ocala you know how the local municipalities like to change speed limits about every 2-3 miles. The Civic keeps you informed on the dashboard what the speed limit is along the way, which is very nice. Also, the rev matching on the Si is sweet- need to slow down, just grab a lower gear and lightly tap the brake. It is smooth and effortless control that beats an automatic every time!

Once in Ocala I jumped on I-75 and was on the home stretch to Tampa and over the Howard Frankland bridge to Pinellas County and my home in Seminole, reaching there at 11:40PM. Covering 1330 miles in 22 hours.  Breakfast in Rochester, NY and dinner in Seminole, FL all in the same day thanks to this incredible Honda Civic Si!

Driving impressions: I'll give you my overview and then I have a video I encourage you to watch to get a complete report on the Civic Si's performance by Matt Moran. I agree with 99% of what he says in his review after he spent a week in an Si.

Paul's driving impressions:    Engine Performance - Torque curve saves the day.  The fat, flat torque curve makes this Civic feel like a hot rod. It has the muscle for all street use up to 70 MPH.  It does not feel like 200 HP, more like 240-250 and I use the comparison of my Alfa Romeo Giulia Ti Sport that is rated at 280 HP. That car is about 300 pounds heavier and the two cars feel the same for street use up to that 70 MPH.

Handling/ Suspension - The ride is firm but not harsh. You completely loose the sensation of firmness as you reach highway speeds. Combining the ultra comfortable sport seats with the suspension characteristics, the car is surprisingly comfortable. I did not feel tired after driving 22 hours in it, just the opposite, I felt fine and even wished I could have kept going I was having so much fun rowing through the gears after riding along on cruise control for a good portion of the journey.

Steering - The steering is crisp and a little on the heavy side. I rate it excellent overall. The heaviness goes away at faster speeds but the best thing is you get some feedback from the tires so you 'know' where the front end is going like you are connected to the mechanical parts.

Transmission/ Shifter - A crowning achievement for a car under $30K. I owned a Porsche Boxster and I think this gearbox is as good as the Porsche. And with rev match on it takes the work out of driving a manual for perfect downshifts. Have it either way if you are do it yourself type. But I left it on and kept smiling every time I shifted.

Looks/ Appearance - The more I look at my car, the more I like it. It grows on you.  I parked at the food pick up spot at a Panera Bread the other day and the guy next to me said- hey I like your car. Also at my Tampa Bay Racers lunch this week one of the members commented (Porsche owner) your car looks meaty, aggressive.  Several members also said they love the Blazing Orange Pearl color! I have ordered a set of silver wheels with Michelin Pilot Sport 4S tires, just for a change of pace and will update the pictures when I get them.  I am old school and can't wait to see the 'silver look' with this orange paint. The interior is a home run with good looking materials and premium feeling switchgear. Everything you touch feels quality and the Si seats look so nice.

Areas of Improvement - It is hard for me to find a shortcoming, but one that stands out is the hump for the center brake light. It obstructs the view out the back window. For such well thought out cabin for the Civic, the hump on the rear package shelf is a big miss on Honda's part. Why not have it at the top of the back window.  I must say it bothers me looking in the rearview mirror.  Honda- I hope you are listening. If enough owners complain maybe they will change it.  The second complaint is the electronic parking brake. It's OK, but barely that. It sometimes does not release when you push the button down to release it. I found you have to put your foot on the brake to get it to release. Way too complicated.  Just give us the old fashion hand brake!

Conclusion - A written review could go on for pages but watch this video- It gives you an honest assessment of the car and everything you need to know. All I can say in summary is that it is fun to drive and way better than I expected at this price point. The Civic does so many things well, it feels like an old friend.

So now it is time for the video- well worth your time to watch:

Complete Review of the Civic Si    by Matt Maran 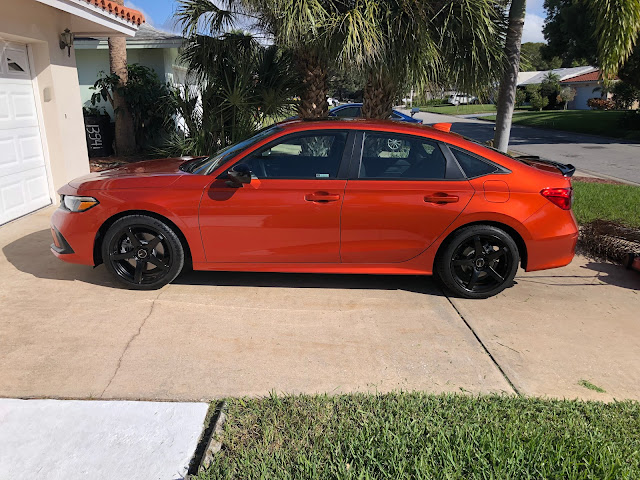 After pressure washing every inch of the car and a coat of hand rubbed wax, looking good. 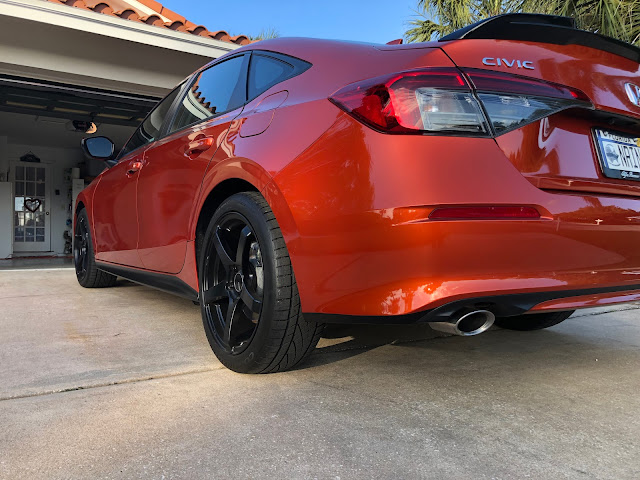 Here's my Si with some Cricut Smart Vinyl accents on the rockers and lower fenders. 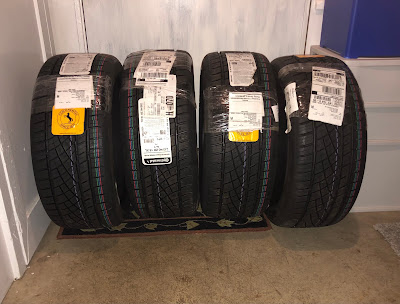 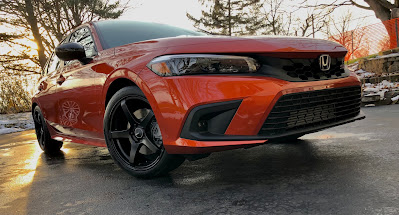 Here are the tires and wheels I went with.  I used Fitment Industries to buy the Enkei Kojin wheels (super happy with the buying experience with them) and purchased Continental Extreme Contact DWS06 Plus tires through Tire rack.  I have another set of Michelin tires and  Aodhan wheels on order from Fitment Industries that I will highlight and do a compare and contrast review of the tires in the future. Watch for more on this Civic Si as i have a few appearance mods planned!
This Review brought to you by Paul Ziegler, Publisher Carcamerastory.com
Follow on @wownowpics on Instagram
Posted by carcamerastory.com at 6:17 PM