I finally did it- I bought another Elantra N! I posted this news on Reddit and I got several comments asking why?

Here's the cars and you will see the why behind it below the picture. 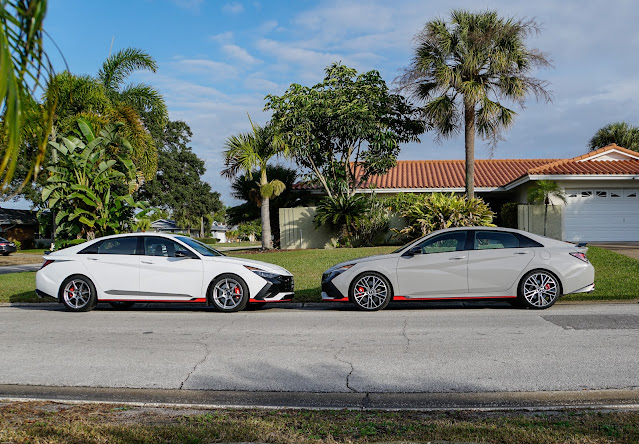 Why buy two Hyundai Elantras?  Well for the past 2 years I have been trying out a number of new cars. I took the money I got selling an Alfa Romeo Quadrifoglio and used it to buy two cars. Those were a Honda Accord Sport and an 11th Gen Honda Civic Si. Those were fine cars but the Accord was a big family sedan and the Civic was perfect for 90% of my driving needs but was lacking in power.  After several months of ownership of both Hondas my attention focused on the rave reviews on YouTube of the Hyundai Elantra N.

The Civic was the first to go, trading it for the Ceramic White Elantra N shown above. The Civic being a little too quiet (no exhaust sound) and a little uderpowered  (50 more HP would be welcome),  the Elantra N seemed to check all the boxes for me.  Boy, did it ever. That feeling came back where, on a Saturday morning I couldn't wait to get up and take it for a ride. The added power combined with the exhaust note had me hooked on the car. I also fell in love with the DCT (automatic transmission) that has a brain of its own, shifting exactly when it should and doing it faster than any human, and it even blips the throttle to rev match on the downshifts.

Then my story gets more complicated.  Having sacrificed my 6 speed manual Civic for the automatic 'N' car, I thought maybe it was time to get another Civic Si so I would still have a manual car to drive. You guessed it- I traded the Accord for a second Civic Si!  I had done so well with resale value on my first Civic and the used car market was still holding up I figured it was a good time to trade the Accord. It was August '22 and the used car market began to decline in July so timing was good to make a trade. My second Civic Si was a beautiful Aegean Blue and a real good looking ride.

But then I watched a YouTube video of a manual Performance Blue Elantra N by Joe Raiti of Raiti's Rides. Of course it was one with a manual and the smile on Joe's face when he got 'On Throttle' with it had me thinking.  If I could get a good price for my Civic Si, it would not cost that much more to get into an Elantra N with the manual.  So my search began to find a Cyber Gray 'N' with the manual. It took about 6 weeks but I located 3 in Florida and called all three dealers.

Making a deal on the phone was not as easy as I thought as the dealers all wanted me to come in to talk. I had success with Rick Case Hyundai in Plantation, FL in making a great deal on the phone. I worked out my deal with Ryan Marcus who I highly recommend. He quickly put the numbers together after I told him what I was willing to do and if there was something I didn't want, like certain add ons he was able to get that taken care of. In the end, I got a great deal and they gained a satisfied customer. One thing that stood out with Ryan- he was either right there to answer my call or he would text or call back quickly if he was with another customer.  I would have traded my Civic in but with the market still strong for Civic Si's I sold it for more on Auto Trader, enough more so it more than covered my sales tax credit if I had traded it in.

So on January 3rd I flew to Ft. Lauderdale where Ryan had an Uber waiting to bring me to the dealership. Ryan had everthing ready with the beautiful new 'N' sitting out front. I was introduced to Andrii in finance who handled all the paperwork (Cash deal) and in less than an hour I was on my way back to St. Petersburg with what I truly think is a keeper. There will be fewer and fewer manual cars available in the future, let alone ICE manual cars. The Elantra N I predict will become one of the last, best performance cars available to buy. 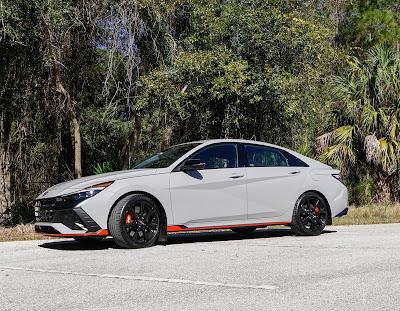 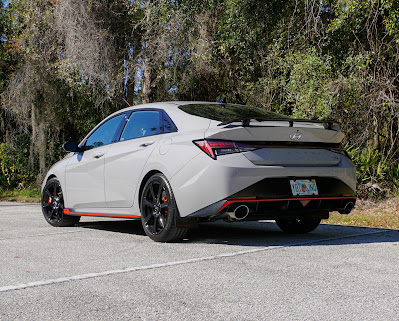 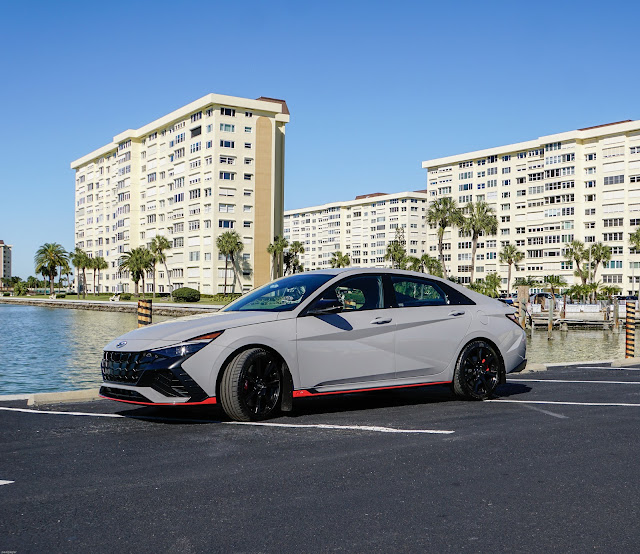 So if you think I'm crazy, maybe I am but I'm certainly happy with owning two of these fabulous cars!

I'll soon be doing a full review comparing the two cars because I know a lot of you are torn which one to buy, the DCT or the Manual.  I think you will find that post very interesting.  In the meantime I'm staying around home for a couple of weeks after having driven 1800 miles between New York and Florida since New Years day.    Happy New Year everyone.

Posted by carcamerastory.com at 5:19 PM