Smog and Electrification -Looking Back While Looking Forward

The feature article in the June 1967 Road Test magazine was: 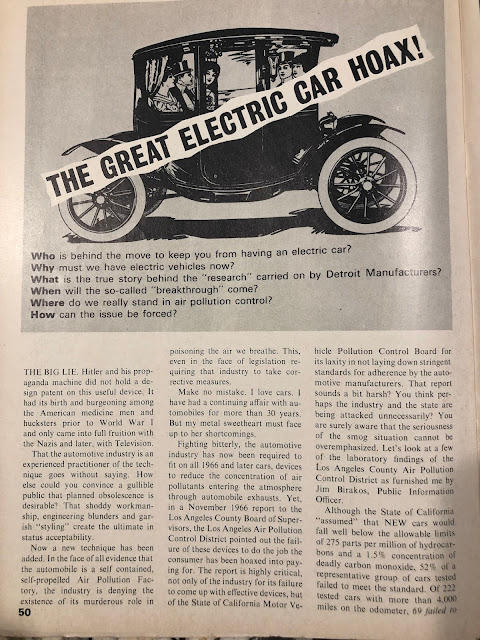 Sounds like we are still discussing this topic today!  Well, for this post I thought the end of a year is a good time to reflect back- way back 54 years on a topic that's in the news every day. Isn't it amazing the lack of progress we have made in electrifying our fleet of cars in America!  That has a lot to do with personal preference from the buying public for ICE vehicles.  It also has a lot to do with battery technology, or lack thereof, given the strides made in other areas such as computing power, space travel and even our everyday television sets.   My opinion is we are not there yet on either front.

The typical car buyer is gun shy about getting an EV because of 'range fright' and inconvenience of recharging a battery. On the second major point, battery technology is better but it has a ways to go and buying this year's EV might prove a disapointment when in 18 months to 2 years superior battery technology is offered in updated vehicles. You could get stuck driving an 'antique' in todays hyperfast changing technology. 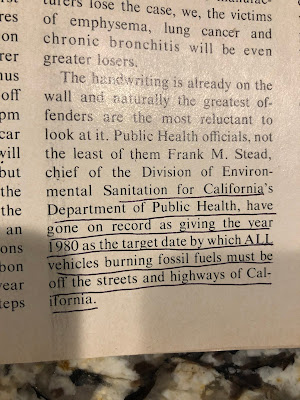 What is amusing is the political side to this discussion. The politicians are so full of it, you can't take anything they say seriously. Like the underlined section of this article- basicly outlawing ICE vehicles in California starting in 1980.  What happened to that deadline? Sounds like New York state when they passed a law a few months ago banning certain ICE vehicle sales after 2030- 2035.  Allowing for a phase in period.  Politicians tell you what they think you want to hear wether it makes sense or not.

And for a little review of the science behind the development of EV's here's a few of the automakers attempts that may give you a chuckle, or may give you a sense of how complicated and diverse a set of 'solutions' can be:   Point is - automakers have been studying this subject a long, long, time.

I know some of you will say its a conspiracy by the oil companies to prevent EV's from becoming the norm. I say no - it is not easy to mass produce EV's that are economical to buy, environmentally friendly to produce in the millions, and acceptable to the mass market given the downsides to owning an EV. 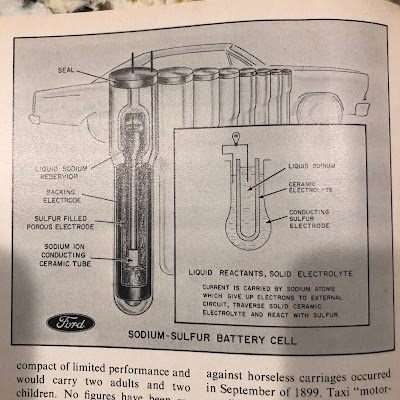 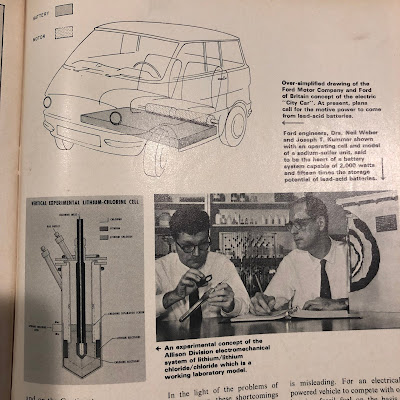 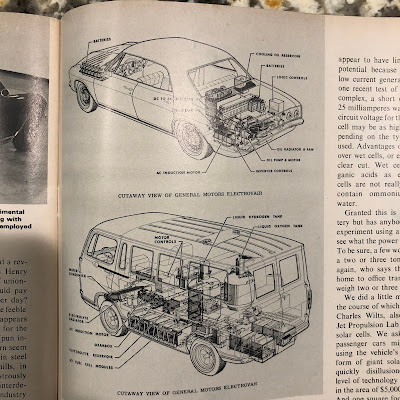 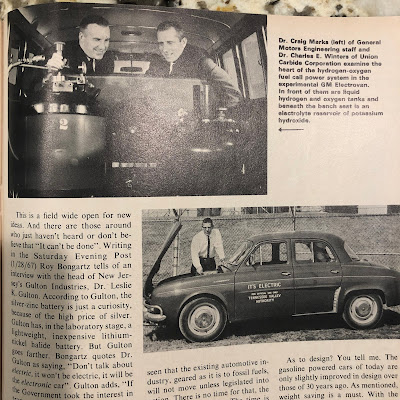 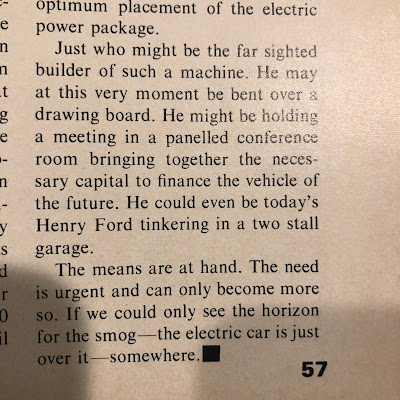 ON TO THE NEXT SUBJECT- ICE VEHICLES AND THEIR CONTINUED IMPROVEMENT:

If you think things have not changed much with car engine performance and continual efficiences found by reducing weight and perfecting aerodynamics, think again. The difference in ICE performance and the overall improvement in how cars are constructed is amazing.  I am still blown away knowing the hottest muscle cars of the late '60's can't compare with even 'sporty' compact cars of today.  ( I'm buying a 2022 Honda Civic Si that blows every one of these away in fuel consumption (double the MPG) while matching these 1/4 mile times at 15.1 seconds and besting top speeds with 130 MPH )!!  Take a look: 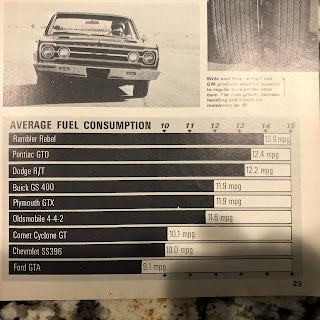 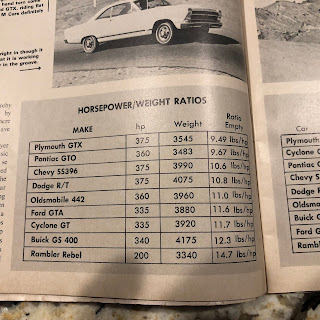 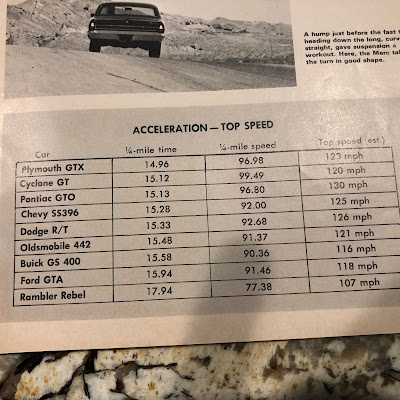 AND THE SUBJECT OF SMOG CONTROL

Back in the '70's all the talk was smog control for cars. Every car enthusiast was pissed because the government mandates were essentially killing performance and making cars run like crap.  All at a higher cost for the consumer.  Nothing like paying more for a car that ran worse and felt like a sick dog to drive.  We had just been treated in the '60's to some phenomenal cars, only to see that get stripped away by government regulation for pollution and smog. And the biggie- the dreaded Catalytic Converter!

cartoon caption " The emisions are down to zero, but the car doesn't run!"    Check it out: 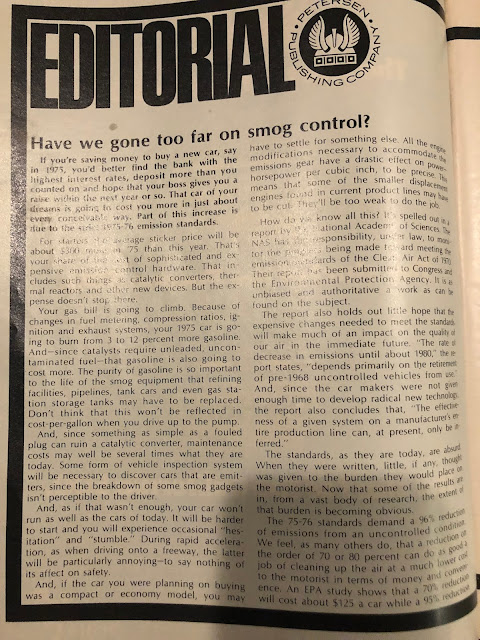 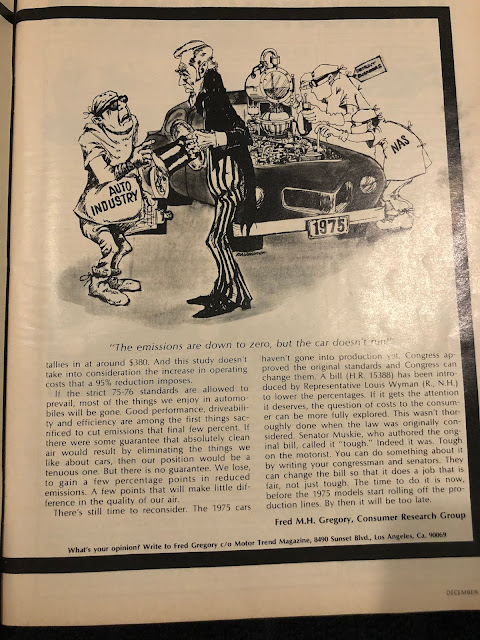 So you see the debates we are having today are not all that different from the debates of nearly 50 years ago. That's the paradox, we have come so far with our cars's technological advancements yet we still have the bugaboos of further controlling pollution (Smog) and we can't ever be satisfied with how far we have come. Like the cartoon implies - how far are the politicians going to push this.  Well they are pushing hard for EV's and they want to kill ICE's but maybe we should be happy with how much we have improved.

Since I'm getting a Honda Civic Si, I thought back to my cars of the past and my '82 Chevy Citation X11 came to mind. What a similar car to the Civic Si! It even resembles the new 11th Gen Civic if you use a little imagination. The formula is the same- a compact, fun to drive car that gets good mileage and handles well yet is affordable. Bingo- The Chevy Citation X11. The Citation came in a coupe and a 4 door and was a hatchback. In coupe form it looks a little like the new, slope back Civic 4 door sedan.  One big thing I remember when getting the Citation X11 was how good it was on gas. I was getting 24 MPG on the highways which was about 5 MPG better than anyting I owned before. And it was a zippy little thing with a nice exhaust sound. Honda- did you copy Chevrolet when you designed the first Si in 1986?  Maybe.  Here's some pictures to compare. Use a little imagination and you will see Civic all over this Citation! 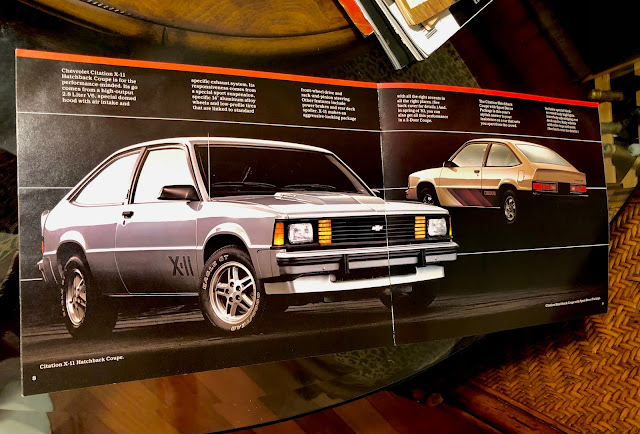 And here's the new Civic Si: 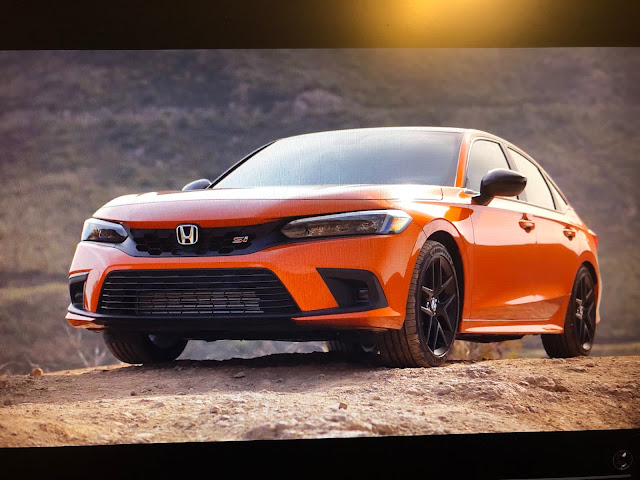 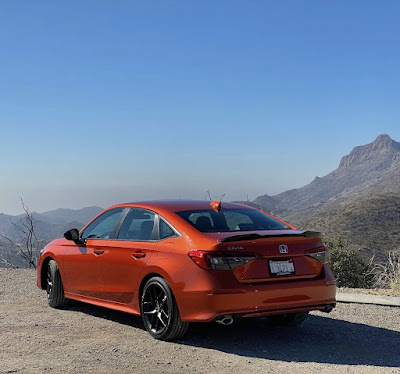 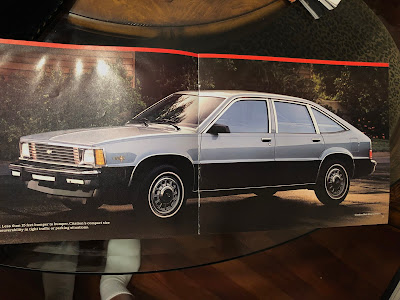 That's all for now.  A long look back into the future?

Check back soon for the delivery of the 2022 Honda Civic Si- sometime in December.

Carcamerastory, brought to you by Paul Ziegler, Publisher

Posted by carcamerastory.com at 7:02 PM